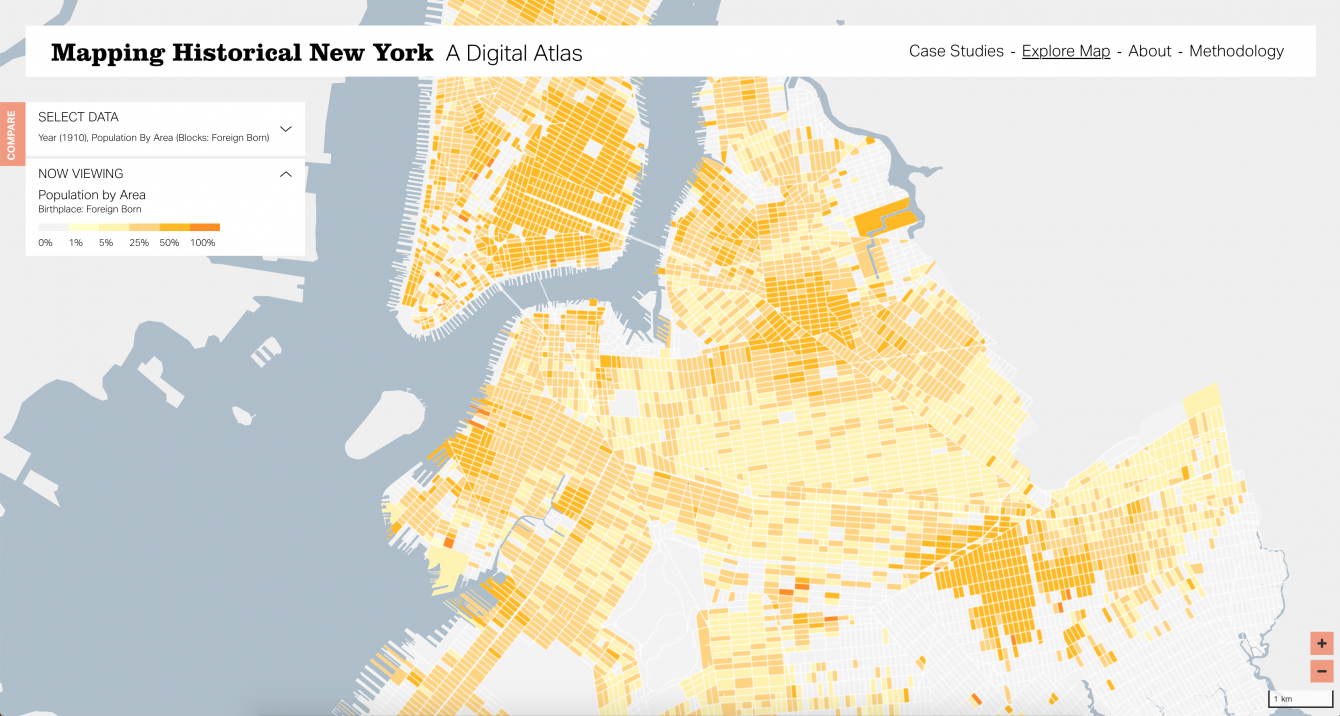 Columbia University has been awarded a major grant from the Robert David Lion Gardiner Foundation to create an online, interactive atlas of historic New York City spanning the years 1820 to 1940. The project is a collaboration of Columbia’s History Department and the Center for Spatial Research in the Graduate School of Architecture, Planning and Preservation (GSAPP).

The new atlas will be a continuation of work made possible by the Robert David Lion Gardiner Foundation’s $1 million grant in 2017 to map the Manhattan and Brooklyn of the late 19th and early 20th centuries. The next phase, driven by the new grant of $922,000, will add Queens, the Bronx, Staten Island, as well as Nassau and Suffolk counties.

Using census data and historical maps, the project digitally displays changes in demography and land use over time. Users will be able to visualize the magnitude of changes that took place in New York City during this time period, including the arrival of new immigrants and the incorporation of parts of Long Island into the city. The project leads hope to also map the entire region at 1820, which would allow them to show the presence of enslaved African Americans, as slavery was not abolished in NY State until 1827.

No other use of geographic information systems (GIS) has created digital mapping of New York City at this level of detail. The map of Manhattan and Brooklyn 1850-1910 is currently in a beta version, with plans for a public launch of a website this fall. The team at Columbia will continue to expand the site as they collect and refine data for other neighborhoods. The project is led by principal investigators Mae Ngai, Laura Kurgan, Gergely Baics, Rebecca Kobrin, Leah Meisterlin, and staff members Wright Kennedy and Dan Miller.

The impact of the maps reaches far beyond the Columbia community, as they will be available online to the general public. This expansion of the original Gardiner Foundation grant will allow the project leads to train students and faculty, offer new classes in urban history, and ultimately, partner with other schools, universities, and community groups, especially immigrant, ethnic, and Black organizations who could potentially use the maps to promote their goals of reducing social inequities.

“We are thrilled and grateful that the Gardiner Foundation continues to support this work, which has created the first-ever interactive map of New York City that shows historical demographic change at the individual level,” said Mae Ngai, Lung Family Professor of Asian American Studies and Professor of History. “It can show, for example, all the buildings where Black people lived in 1850, 1880, and 1910; or those born in Russia; or those who earned their livings as dockworkers, or servants, or button-hole makers. The 1940 maps will show the great migrations from the U.S. South and the Caribbean. This is a fantastic resource for researchers, teachers, and students.”