At Columbia, making an endowed gift is one of the most powerful ways to have a lasting impact. Endowment gifts support students, faculty, and programs, driving progress for centuries to come.

If we at Columbia are to live up to our mission of engaging in the world and embracing the responsibility that comes with our tremendous capacity, we must continue to invest in the research that has made the University into the extraordinary institution it is today, and in the students and faculty who are its engines.

What is an endowment gift?

An endowment gift is a donation that is given with the intent to preserve the original value of the gift, and to grow it over time. The funds are held in perpetuity and invested, and the accumulated appreciation and income on the investment is used to fund an annual distribution. The annual distribution is spent according to the donor’s wishes. Through this dedicated stream of income, an endowment gift ensures the stability of a scholarship, professorship, or program. Donors are encouraged to work with fundraisers to design the most meaningful gift to meet their goals.

What is an endowed fund's lasting impact?

Endowed gifts provide a stable income stream to ensure Columbia’s continued excellence in teaching, research, and patient care. They help Columbia do what we have done for more than 250 years—but better and with more impact. Let’s look at a few examples. Endowed professorships, among the highest academic honors at a university, allow Columbia to recruit and retain the finest scholars in the world. Countless students have benefited from endowed scholarships—enabling them to come to Columbia and later make an impact in their fields and across the world. An endowment ensures students will continue to receive scholarships for decades and centuries to come.

Columbia has benefited from the incredible generosity of our donors in providing multi-million dollar endowment gifts to establish new institutes, create new programs, and transform our financial aid policy. Still, every endowment gift can have a lasting and growing effect on our institution. For example, in 1983, a gift of $100,000 established endowed funds for financial aid, with a scholarship named for a family member, and with a preference for students from New York City public high schools. The value of those funds has grown to well over $500,000 as of 2020. The annual distribution from the gift was approximately $5,000 in the early years and has grown to over $30,000. This gift’s impact will continue to grow and achieve the donor’s vision for increasing access to a Columbia education. 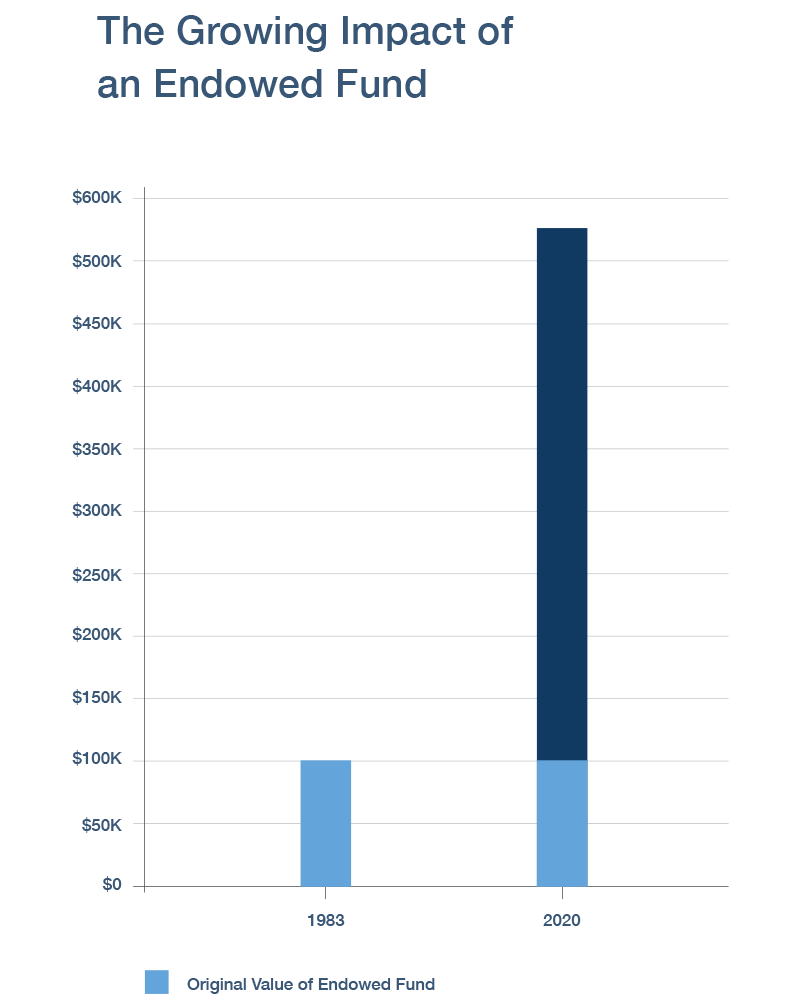 How does a gift to an endowed fund work?

Endowment gifts are managed by Columbia’s expert investment team through one commingled pool of separately endowed funds, not unlike a mutual fund. The scale of the pooled assets allows for the University to take advantage of an appropriate range of investment vehicles to provide a higher total return over time within an acceptable level of risk, and in observance with the highest professional standards. The annual distribution policy is set by Columbia’s Board of Trustees. While the policies and the management of the endowment are executed centrally, the annual expenditure of the distribution from each endowed fund is managed per the individual donor’s wishes, and with stewardship by the program which it supports.

In 2002, the University Trustees established the Columbia Investment Management Company (IMC), a wholly-owned subsidiary of the University, to manage the endowed funds. The IMC is staffed by a team of talented investment professionals and advised by a board that is made up of Columbia Trustees and former Trustees, as well as a small number of non-Trustees, who are investment experts. For more information about the IMC, visit our website.

Tuition is expensive. Doesn't it cover most costs?

Unfortunately, no. The cost of educating Columbia students substantially exceeds tuition, and our New York City location, while integral to the University experience, is also costly. The modest size of Columbia’s endowment relative to our peers means we consistently compete for the same students and faculty, with less.

How is Columbia's endowment doing? 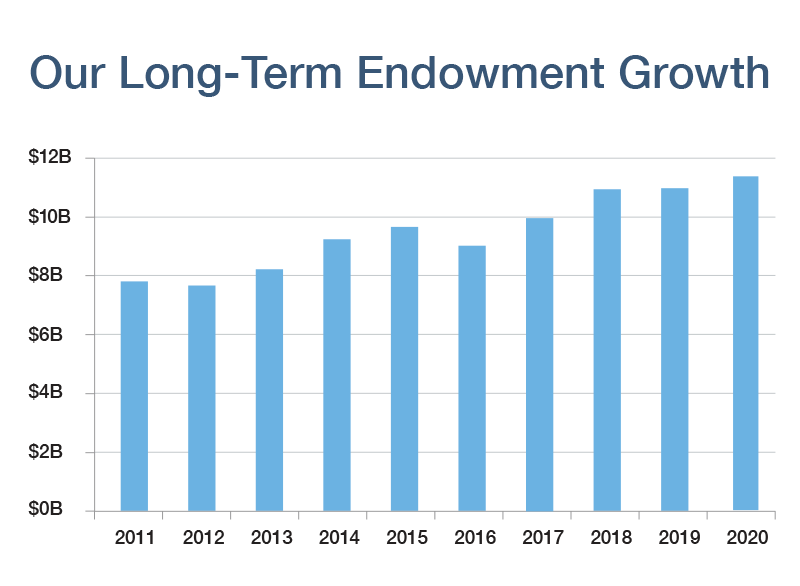 How does Columbia's endowment compare with that of our peers? 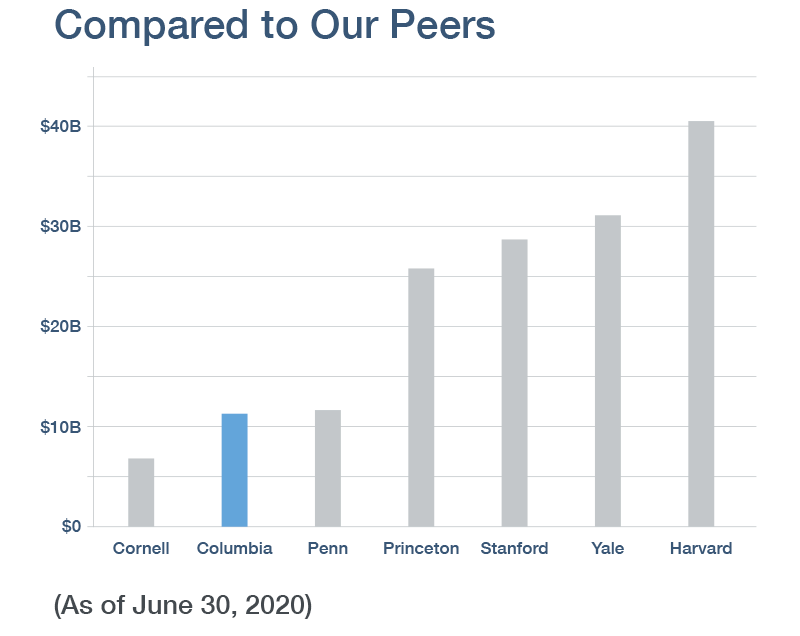 What is the endowment spending rule?

The spending rule is a formula used to determine the endowment distribution each year. It is calculated annually by the Office of Management and Budget and approved by the University’s Trustees. It is designed to be responsive to investment returns and the current level of price inflation, enabling the endowment to protect the corpus (original gift) and retain its purchasing power. Returns in excess of the annual distributions are retained in the endowment to keep the fund growing over time. The current endowment spending rule applies a target spending rate of 4.5-5.0 percent to a trailing market value of the endowment, and also factors in the prior year’s spending grown by inflation. In addition, certain endowments allow for higher levels of spending, as approved by the Trustees. A detailed explanation of the University’s spending policy is provided in the notes to our financial statements.

How does the endowment strengthen Columbia?

The endowment creates a solid financial foundation for the future, providing a reliable source of income to fulfill the University’s mission. It also allows Columbia to weather short-term economic ups and downs.

As at most universities, much of Columbia’s endowment is restricted to specific purposes—such as faculty, student, or program support—designated at the time of the gift. Such restricted funding ensures continued support for those specific purposes. It is also possible to establish endowment gifts with broad purposes that provide maximum flexibility to realize the University’s potential.

When you invest in Columbia through an endowment gift, you seed the future. You become an integral part of a community of groundbreaking researchers, students, and educators. Join us.

Learn more about how Columbia is making an impact in the world by visiting The Columbia Commitment campaign website.